Heritage Used Car and Truck Parts is located in Mobile, Ala. with owner Caleb Lindquist and his family. Lindquist was one of the first in the salvage parts industry who revolutionized how parts could be purchased by utilizing the Internet. This two-part article series explores how Lindquist got into the salvaged parts industry, how an online platform gives him a competitive edge, how eBay and Amazon are providing platforms to simplify the process, and what we may expect from this evolving industry. 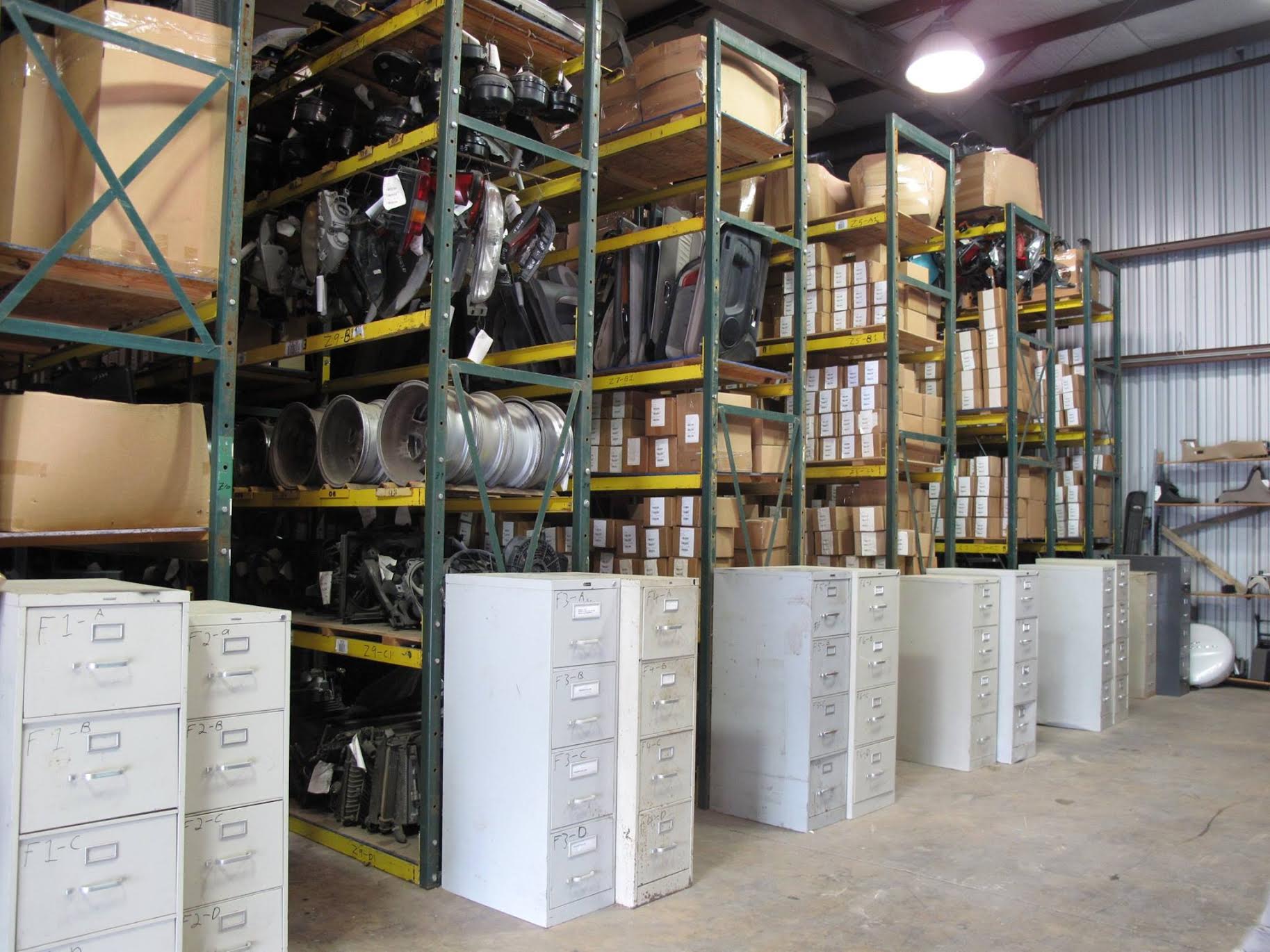 Hollander: It feels like you’re in the cutting-edge side of the industry that’s evolving and moving forward. Do you think that the rest of the industry has a lot to catch up to in this space in terms of marketing and selling digitally?

Caleb Lindquist: Yes and no. I think there will always be a place for the local market. Your local insurance companies have their own direct deadline to get these cars fixed, to get the customers out of the rental cars. A lot of these companies can’t wait for the shipping or transit times. So I think it’s kind of going to break into two kind of separate “yards.” It’s very hard to handle both types of industries or both types of business from the same location because they are handled so differently.

An example would be if we had a local salvage or local body shop come up here and say that they need a part right away, they’d still want a vehicle that needs to be dismantled. They’re not going to understand that you may have 50 to 100 orders in front of them that are just waiting to be shipped that are already paid. They’re expecting your guys to be able to break free and go pull that one part for them, not understanding that you’re on a 24-hour ship deadline with a sold part that’s already been promised. So it’s just a very different business model. I think a lot of the companies are struggling right now and a lot of them need to branch more into it and embrace the Internet side. But I think there’s definitely still a viable business model dealing with your local one-on-one mechanics and body shops, dealerships, etc.

Hollander: What do you think people need to do to embrace the Internet? Is there one trick you could give or any kind of advice?

Caleb: I think the biggest advice I could give is to clean the parts and take pictures. Whenever you’re dealing with ordering a part on the Internet, you’re already adding all sorts of elements where frauds can take place since you don’t know the person you’re buying the part from. You’re handing out some sort of payment information, as well as an address online, to somebody you don’t know, so it takes away some of the apprehension whenever you supply a good, clean picture of the part. To me, the number one thing would be getting your pictures and your parts clean just to be able to be credible and for people to start trusting you.

Hollander: So about Amazon and eBay and your relationship with both of them, how do their fulfillment processes work?

Caleb: eBay’s been really good to work with. The software is excellent. It’s such a great program. You can list out products basically from your inventory to eBay in under a minute, then it's available and ready to be manipulated--price changes and pictures--all through the program. When the order’s placed, it automatically generates into the Powerlink system, you just have to find a work order, promote it to an invoice, and boom, you’re good. And it’s very, very simple, it’s very easy to use, and it’s been great—I can’t say enough about the eLink program-- it’s one of the best pieces of software we’ve ever used here.

Hollander: Have you noticed more sales volume on one versus the other?

Caleb: More on eBay because of the ease of getting our products up there. We definitely sell more on it compared to Amazon, just due to contracts, which Hollander doesn’t have a program for mass listing on Amazon. So because of that, our sales volume on eBay is much greater than what we can actually market on eBay. As far as companies against each other, if you wanted to pit them one by one, I would say eBay makes it much easier to list your product, be able to communicate with the sellers, and they do a better job of getting exposure for the used parts.

As far as being fair and balanced, be it either feedback or a dispute, Amazon is 100% on that. They’re very easy to work with, very understanding, and they have enough staff to look at each problem. If you have something arise with a specific issue, it’s not a blanket statement you’re going to get. They’ll look at your messaging and make an unbiased decision on not necessarily who’s in the right and who’s in the wrong, but what should happen at this stage.

Some of that is changing. It seems like Amazon is starting to really to step up the game in terms of search priority--if you search for a used part, you’re going to find a part pop-up on Amazon now just as much, if not more, than eBay. So it looks like they are starting to advertise the industry a little bit more. It’ll be interesting in the coming months to see what Amazon’s game plan is. But right now eBay has the lion’s share of the parts searches.

Hollander: That’s really interesting. What do you see happening generally with the e-commerce industry in the next five or ten years? Do you have any big predictions?

Caleb: As far as predictions, I’ve got some thoughts. It seems to me that Google is going to be the big game-changer.

I could see Google making alliances with some of these large parts companies. I don’t know if it’s going to be eBay or if it’s going to be Amazon, or if somebody else is going to step up their game and try to take the place, but I can see it becoming very easy for them to control the market—people are primarily using Google as their search engine. I would venture that they’re probably going to make some sort of alliance and drive out other competitors. It seems like it’d be very easy for them to control the market and drive the customers and the traffic directly to whom they want it to go to. I know a lot of people have been unhappy with a some of eBay’s and Amazon's policies, so I think there’s a really big opening right now for a company to step up and become the used parts Internet site to go to. Hopefully it’ll be Hollander Parts or somebody that we have a good relationship with that'll fill that void.

Hollander: Interesting--definitely some food for thought. On another note: you mentioned that you have five sons. Do you think this is going to be a next generation business for you?

Caleb: Yeah, I mean more than likely-- they’re all interested. I have five sons, but they’re all still very young. The oldest is only eight, so…

Hollander: You’ve got your hands full!

Caleb: Yeah, they're a bunch of babies right now. Of course now, they all want to be working here but we’ll see how that changes, if it does. I’m not going to push it on them. But I really enjoy working here. I like it a lot more than I would the accounting field, even though I did pick a career in that. It’s just everything’s different every day, every vehicle changes, customers are very different, and then the market, it just has changed so rapidly. It’s always evolving, either a new program to try, or somebody else pushing their leads, or just a new website. With the innovation that’s out there, the automotive industry coming on board, it’s a really exciting environment.

Hollander: Do you have any highlights or one really great story from your career so far?

Caleb: Yeah, I mean some of them are funny, we’ve got just kind of everything. I don’t have one specifically per se. I’ve got like little bits of hundreds of them.

What’s great about working in the salvage industry is you just have something that the normal person literally will see as junk or not see its worth. And it’s just great to see that being able to buy something at a low price and then being able to capitalize on that and see it make its money over and over again on something that’s of absolute zero value to somebody else, is just great.

Cars are so important to people right now. I mean, unless you’re in one of the major cities that has a great transit system, your vehicle pretty much dictates your life and what you can do, or limits you as well. I mean it either enables you to get to your job or to your work, or it can restrict that by having issues. It’s just great whenever you can help somebody get on with their life, even if it’s a small thing—like if you’ve got a broken cup holder in your car, even though that might not stop you from being able to go about your business and progress your life, it’s just irritating and every time you get in that vehicle, you see it. Whenever you’re able to fill that void and get somebody that part that was just destined to be crushed or junked, and instead it’s going to go enrich somebody’s life. It’s a great feeling, so it’s good to see.

Hollander: Absolutely. A cup holder is very important. I need my coffee to get to work, so car and coffee.

Caleb: Yeah, we had a vehicle one time that the cup holders were really shallow and it was always flipping out of there. You’d be having a great day until your coffee spills all over then would just be terrible, so it’s definitely important. And it’s just the little stuff like that and then it can progress to finding somebody an engine when they were going to either dispose of the car and have to face the price of purchasing a new vehicle or paying a dealership $4,000 to fix something, and you’re able to give it to them for, you know, say $100 or $200. Just to see the relief on somebody’s face, that they’re appreciative of getting that, just speaks volumes. It’s a lot of fun.

Hollander: Absolutely. Very rewarding. Caleb, we’d like to that you very much again for taking the time.

Caleb: Thank you, and you guys have a great afternoon.

This concludes part 2 of our blog post series with Heritage Auto Parts owner, Caleb Lindquist. To learn more about him and what his company is doing, please visit http://www.heritageautoparts.com/.